This framework is the end product of my experience in reverse engineering iOS kernelcache,I do manually look for vulnerabilities in the kernel and have automated most of the things I really wanted to see in Ghidra to speed up the process of reversing, and this proven to be effective and saves a lot of time. The framework works on iOS 12/13/14 and has been made to the public with the intention to help people to start VR in iOS kernel without the struggle of preparing their own environment, as I believe, this framework ( including the toolset it provides and with some basic knowledge in IOKit) is sufficient to start dealing with the Kernelcache.

AMD Ryzen 9 3900X 12-core, 24-thread unlocked desktop processor with Wraith Prism LED Cooler $484.00
The world's most advanced processor in the desktop PC gaming segment Can deliver ultra-fast 100+ FPS performance in the world's most popular games 12 cores and 24 processing threads, bundled with the AMD Wraith Prism cooler with color controlled LED ... read more
(as of February 28, 2021 - More infoProduct prices and availability are accurate as of the date/time indicated and are subject to change. Any price and availability information displayed on [relevant Amazon Site(s), as applicable] at the time of purchase will apply to the purchase of this product.)

AMD Ryzen 5 5600X 6-core, 12-Thread Unlocked Desktop Processor with Wraith Stealth Cooler $389.99 $377.10
AMD's fastest 6 core processor for mainstream desktop, with 12 processing threads Can deliver elite 100+ FPS performance in the world's most popular games Bundled with the quiet, capable AMD Wraith Stealth cooler 4.6 GHz Max Boost, unlocked for overc... read more
(as of February 28, 2021 - More infoProduct prices and availability are accurate as of the date/time indicated and are subject to change. Any price and availability information displayed on [relevant Amazon Site(s), as applicable] at the time of purchase will apply to the purchase of this product.)

AMD Ryzen 5 2600 Processor with Wraith Stealth Cooler - YD2600BBAFBOX $199.00 $189.99
System ram type: DDR4_sdram
(as of February 28, 2021 - More infoProduct prices and availability are accurate as of the date/time indicated and are subject to change. Any price and availability information displayed on [relevant Amazon Site(s), as applicable] at the time of purchase will apply to the purchase of this product.)

The whole framework is written in Python,and can be extended to build tools upon, it provides some basic APIs which you can use in almost any project and save time from reading the verbose manual, you can just read the code in utils/ directory.

Ghidra is good when it comes to analyzing the kernelcache, but like other RE tools, it needs some manual work, ghidra_kernelcache provides a good entry point to fix things at the start and even while doing reverse engineering thus providing a good-looking decompiler output.

There is a similar project done by @_bazad in IDAPro called ida_kernelcache which provides a good entry point for researchers wanting to work with the kernel image in IDA, my framework looks a bit similar to Brandon’s work, and goes beyond by providing much more features to make the process of working with the kernelcache a lot easier.

Here are some of the features provided by the framework :

These features are made as a separated tools which can be executed either by key shortcuts or by clicking on their icons in the toolbar.

Go to Windows → Script Manager, in scripts listing, go to iOS→kernel category and check the plugins seen there, they will appear in GHIDRA Toolbar .

in logos/ directory, you can put you own logos for each tool.

ghidra_kernelcache requires at the first stage iometa (made by @s1guza), a powerful tool providing C++ class information in the kernel binary, the great thing is that it works as a standalone binary, so the output can be imported to your favorite RE framework by just parsing it. My framework takes iometa’s output and parses it to symbolicate and fix virtual tables.

After decompressing the kernel, run the following command :

Load the kernelcache in Ghidra, DO NOT USE BATCH import , load it as Mach-O image. After the Kernelcache being loaded and auto-analyzed, click on the icon shown in the toolbar or just press Meta-Shift-K, then put the full path of iometa output which is /tmp/kernel.txt in our case.

if you want to use jtool2 symbols, you can run jsymbol.py located iOS→kernel category as well.

Full API examples are in ghidra_kernelcache/kc.py

→ Here are some examples of manipulating class objects :

If you run the script against the whole kernelcache, it may take several minutes to finish, once finished, Ghidra will provide the following :

→ a new category has been added in Bookmark Filter called “iOS”: 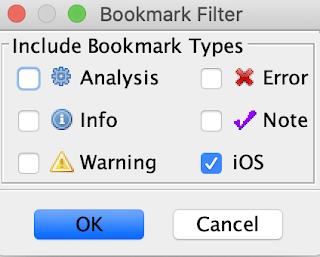 → IOKit class virtual tables are added to ‘iOS’ Bookmark for better and faster class vtable lookup, you can just look for a kext or a class by typing letters,word or kext bundle in the search bar.

→ Creating class namespace and make class methods adhere to it:

→ Creating class structure with the respect of class hierarchy :

→ Creating class vtables, and each method has its own method definition for better decompilation output:

Full implementation can be found in utils/class.py.

Here are some screenshots of before/after using the scripts to just give a clear picture :

extra_refs.py is based on data flow analysis to find all virtual call methods and resolving their implementations automatically, it has the ability to recognize the source data type from the decompiler output and resolve all virtual call references, so the user is able to jump forward/backward directly to/from the implementation without manually looking for it.

The most useful feature provided by extra_refs.py is that it keeps the references updated on each execution, for example, let’s say you’ve changed a variable data type to a class data type, extra_refs.py will automatically recognize the change, and will go recursively on all call sites to resolve their references, and it finishes only when the call site queue is empty.

You can find the implementation in utils/references.py, fix_extra_refs() parses the pcode operations and looks for CALLIND and CALL opcodes, then gets all involved varnodes on the operation, once a varnode definition is identified, it gets its HighVariable then identifies the class object type of that variable, if the type is unknown it ignores it,otherwise, it takes the class name, looks up its virtual call table,using the offset provided by the varnode, it gets the right virtua l call and puts a reference on the call instruction.

Here is an output example of running extra_refs.py :

Note that it successfully resolved IOService::isOpen(), OSArray:getNextIndexOfObject() and IOStream::removeBuffer() virtual calls without any manual modification.

Next, the scripts enters to IOStream::removeBuffer() virtual call, gets the HighVariables of this method then resolves their reference like the current working method and so on.

I believe every researcher has some script to deal with this part, as it is the main attack surface of IOKit, doing so manually is a burden, and it must be automated in a way the researcher wants to dig into multiple external method tables.

There are two scripts provided by the ghidra_kernelcache : fix_methodForIndex.py and fix_extMethod.py. You can enable them like the other scripts as shown above.

Usage: Put the cursor in the start of the external method table, run the script, give the target class object type, and the number of selectors. that’s all.

This is a useful script to propagate the class type through all encountered methods. and it’s extremely useful for extra_refs.py script, to explore more functions in order to discover and resolve more references.

Usage: Put the cursor in the decompiler output of the wanted function, run the script from the toolbar or press Meta-Shift-N .

Still under development, supports basic Pcode operation, but it works in easy cases, better than nothing. I only need to add support for other exotic operations like SUBPIECE …

If someone wants to help, or wants to start working with low level stuff in Ghidra, this is the opportunity to do so. Implementation can be found in ghidra_kernelcache/propagate.py

Parsing C++ header files in Ghidra is not possible, and having kernel function signatures in kernelcache is a good thing, for example, let’s say we have added the symbol virtual IOMemoryMap * map(IOOptionBits options = 0 );, Ghidra will automatically re-type the return value into IOMemoryMap pointer automatically for both function definition and function signatures ,and doing so with several symbols will drastically improve the decompilation output.

In order to accomplish this task without any manual modification or using Ghidra C header parser, I’ve figured out a way to do it, and even better, defining structure and typedef symbols as well.

You can add any C++ symbol into signatures/ directory with the respect of the syntax, and you can find defined function signatures in this directory.

Usage: After symbolicating the kernel, it is highly recommended running the script load_sigatnures.py to load all signatures. As most of the previous tools, run this script by adding it in the toolbar or from the Plugin manager or just press Meta-Shift-S .

This script is straight-froward, it imports all structures/classes/typdefs from old project to a new project. It is highly recommended to run the script before symbolicating the kernelcache.

I will not publish it until Ghidra 9.2 released, I still unable to make it work reliably due some limitation in the Python API provided by Ghidra. But if you are curious and want to see the implementation snippet, you can see it here.

If you see the project interesting and want to contribute, just do a PR and I will review it, meanwhile, I would like to see some contribution in the following areas: